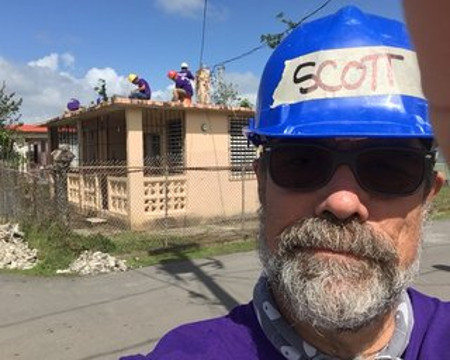 Following the presentation, there will be worship in the manner of Friends at 11:00 a.m., with people speaking out of the silence as they are moved to do so.

Hoskins retired from teaching in the George School Arts Department last June, and has spent much of his time since then working on Disaster Response as a volunteer in the Florida Keys after Hurricane Irma, and as a Team Leader in Yabucoa, Puerto Rico after Hurricane Maria.

Scott will be speaking on the topics of hurricane recovery in Puerto Rico, on the work of the organization with which he volunteered, “All Hands and Hearts,” and on service work in general.

Hoskins said, “We were mostly repairing roofs, many of which were still leaking five months after Hurricane Maria. Repairing them involved chipping off the old roof surface, sealing the cracks with crack sealer and the holes with hydraulic cement, priming the roof, and painting it with two new coats of very thick white latex roofing sealer. But listening to the homeowners as they described their challenges during and since the Hurricane was probably equally important. Each in their own way was grieving the loss of their world from before.”

Scott Hoskins was formerly a Stagecraft and Video teacher at George School and Head of the Arts Department. He is a graduate of Earlham College in Richmond, Indiana, a former member of the Stagehands Union, and has worked on Broadway as a stagehand for mega-hits, “Annie,” “Dracula,” and others.