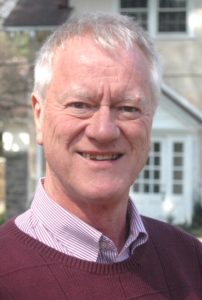 George Lakey, sociologist, Quaker, and former Swarthmore professor, will share from his newest book, “Viking Economics: How the Scandinavians got it right and how we can, too,” (2016, Melville House, NY & London) Sunday, December 3, at 9:45 a.m. at historic Newtown Friends Meetinghouse, 219 Court Street.. Worship in the manner of Friends will follow at 11:00 a.m. The public is invited to all events.

The talk is entitled: A Nation Divided: What can we learn from the Nordics?

Lakey says: “In the 1930s Sweden and Norway were even more polarized than the U.S. is now. The far right and the far left battled for control of the countries’ economic and political direction. By the 1950s Swedes and Norwegians had reached a rough consensus and were in the top tier of international ratings for equality, freedom and shared abundance.”

Viking Economics describes Sweden, Norway, Iceland and Denmark as sharing the “Nordic economic model, even though only Norway struck oil.” It cites their seventy-year track record as bringing them top billings internationally in several categories: “best place in the world to be a senior;” “best place to be a mom;” “best educational system;” and “more start-ups per capita than the U.S.”

Lakey continued to say, “The Nordic countries are not utopia and they do make mistakes, but these small countries made themselves into laboratories that others can learn from.”
George Lakey recently retired from Swarthmore College where he was Eugene M. Lang Visiting Professor for Issues in Social Change and managed the Global Nonviolent Action Database research project (nvdatabase.swarthmore.edu). Each of his nine books has been about change and how to get it. In 2010 he was named the Peace Educator of the Year in 2010 by the Peace and Justice Studies Association. He has received the Martin Luther King, Jr., Peace Award, the Paul Robeson Social Justice Award, the Ashley Montague Conflict Resolution Award, and the Giraffe Award for Sticking his Neck out for the Common Good.

He is a member of Central Philadelphia Monthly Meeting, a gay man with four great-grandchildren, and plays Broadway tunes for sing-alongs. His first arrest was for a civil rights sit-in; he has served as an unarmed bodyguard for human rights defenders in Sri Lanka, and recently walked 200 miles to stop mountaintop removal coal mining in Appalachia. He has founded a number of social change organizations including Training for Change and, most recently, Earth Quaker Action Team (EQAT.org).