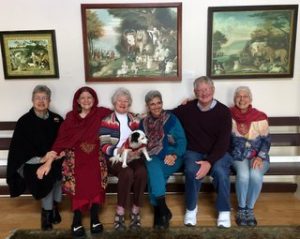 A panel of volunteers will speak about their ongoing successful resettlement efforts on behalf of two young Syrian refugee families in Bucks County, Sunday, November 19 at 9:45 a.m. at the Newtown Quaker Meetinghouse 219 Court Street. In attendance will be representatives of the 13 Quaker Meetings in the Bucks Quarterly Meeting of Friends (Quakers). Meeting for Worship in the manner of Friends will begin at 11 a.m.  The public is invited to attend both events.

The title of the presentation will be Sacred Activism at Work: The Bucks County Interfaith Coalition’s Resettlement of Two Syrian Refugee Families.

Norma Kaplis said, “Sacred Activism will be defined and differentiated from other types of community service. Highlights of the resettlement of these two families will be described, including problems, solutions, and what lies ahead (known and unknown).  A 15 minute question and answer period will be included in the presentation.”

All phases of resettlement will be described including the groups’ successful efforts to find affordable housing, jobs, Arabic speakers to translate, ESL (English as a second language), transportation (for people without US driver’s licenses), health and dental care, child care, pre-school, fund-raising for initial needs, and recruiting volunteers.

Last Sunday, the Interfaith Coalition held a highly successful public auction at Congregation Kol Emet in Morrisville to raise funds for the two Syrian refugee families.  Featured in the auction were stunning items of woodworking, stained glass, quilting, ceramics, and paintings donated by Bucks County artists.  The highlight was an exquisite hand-crafted, signed English Walnut Wepman end table donated by Mira Nakashima of internationally-known Nakashima Woodworker in New Hope, which sold for $3,500.   Two hundred and fifty people bought tickets for the event, bid on auction items and raised over $15,000.