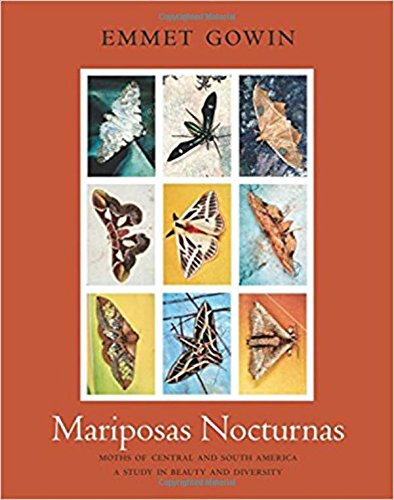 Emmet Gowin, Professor Emeritus of Photography at Princeton University and a member of Newtown Meeting, will speak to the adult class of Newtown Quaker Meeting about his new book of photography, Mariposa Nocturnas: Moths of Central and South America, a Study in Beauty and Diversity, at 9:45 a.m. on Sunday, February 25, at the historic Newtown Friends Meetinghouse . Meeting for Worship in the manner of Friends will follow at 11 a.m. The public is invited.

Gowin’s latest book of photographs of “the lowly moth” was released in 2017 to rave reviews, being called “stunning,” “brilliant,” “spectacular,” and “an object of beauty and a document of inestimable value.”

Gowin is a world traveler, often in the tropics. He said recently of the photos of moths in his new book that, “An interesting condition under which these photographs are made is that all are of living insects in their fully natural stance; thus whether this book is used by children or scientists, the look is of the real and fully alive creature. And they are splendid.”

Gowin is Professor of Visual Arts in the Lewis Center for the Arts, Emeritus, at Princeton University. Born in Danville, Virginia, Gowin has been teaching at Princeton since 1973. His work is represented by the Pave/MacGill Gallery in New York.

Emmet Gowin’s many shows have focused on images of family, the earth and man’s impact on it, antiquities, and nature. “Emmet Gowin/Photographs: This Vegetable Earth is But a Shadow,” a retrospective of his work, was at the Philadelphia Museum of Art in 1990. “Changing the Earth,” with Jock Reynolds, Terry Tempest Williams, and Philip Brookman (Yale University Press, 2002) accompanied an exhibition that traveled to museums throughout the U.S. for several years. And Gowin’s 2006 exhibition, “Mariposas Nocturnas, Edith in Panama” was at Pace/MacGill in New York.

Gowin is the recipient of many awards, including a Guggenheim, two National Endowment for the Arts Fellowships, the Governor’s Award for Excellence in the Arts from the Commonwealth of Pennsylvania, the Friends of Photography Peer Award, and a Pew Fellowship in the Arts. He received the President’s Award for Distinguished Teaching at Princeton University in 1997 and the Behrman Award in 2006.

Emmet Gowin and his wife, Edith, live in Newtown.

Newtown Friends Meeting, co-founded in 1815 by Quaker minister and artist, Edward Hicks, is open to the public, with Sunday School classes for children and adults at 9:45 a.m. and worship based on expectant silence “after the manner of Friends” at 11 a.m. Childcare is provided.