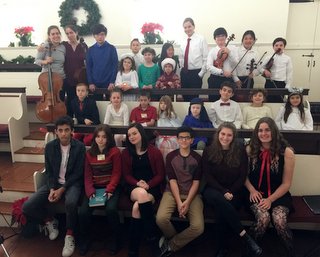 Quaker Meeting for Worship will be held at 11:00 a.m. on Sunday morning, December 24, at the historic Friends Meetinghouse, 219 Court Street.

That evening, the traditional Christmas Eve candlelight service will be held at 7 p.m. at the Meetinghouse​,​

​​followed at 7:30 by​ ​​Newtown ​Quaker​ ​Meeting ​Homecoming with presentations to​ ​five​​ ​young adults in the Meeting of reproductions of Edward Hicks’ Peaceable Kingdom and a social in the Gathering Room.
Each young person at age twenty-one in Newtown Quaker Meeting receives a framed replica of Edward Hicks painting of The Peaceable Kingdom inscribed “in recognition of your being a part of our own ‘peaceable kingdom’ and in celebration of your attaining your majority as an adult member of Newtown Friends Meeting.”

Edward Hicks was co-founder of Newtown Friends Meeting in 1815. During his lifetime, he was known primarily as a Quaker minister and painted coaches, signs and “ornamentals” for a modest living.

The young adults who will receive their Hicks paintings this year are: Brennan Kinnel of Newtown, Arielle Haug of Richboro, Katherine Elliott of Hopewell, NJ, Haley Halstead of Feasterville, and Claire LeGall of Tacoma, WA..

Similar copies of The Peaceable Kingdom have been presented by members of Newtown Quaker Meeting to His Holiness the 14th Dalai Lama of Tibet, former

The paintings are based on the Old Testament prophecy that in God’s peaceable kingdom, the lion shall lie down with the lamb and a little child will lead all creatures. In the background of the painting is the Quaker founder of Pennsylvania, William Penn, arranging a treaty with Native Americans.

Hicks’ paintings now hang in leading museums throughout the country and are highly valued. Many replicas of his Bucks County farmscapes, paintings of historic occasions such as The Signing of the Declaration of Independence and General George Washington on his horse, as well as versions of his Peaceable Kingdom are exhibited in the Newtown Meetinghouse Gathering Room. Edward Hicks’ former home is on Center Street and his modest grave is in the burying ground at Newtown Friends Meeting.