Alisa Myles to Speak on her Spiritual Journey in Adult Class, Sun, Jan 14 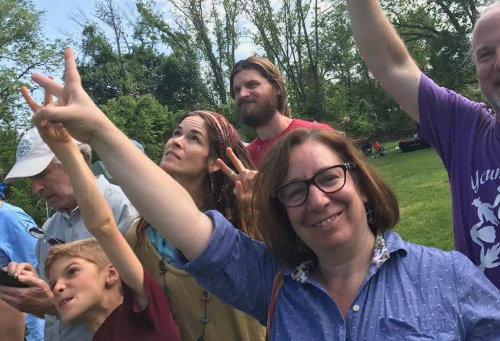 Alisa Myles, a member of Newtown Quaker Meeting, professional educator, innovator and twenty year resident of Newtown Borough, will share her Spiritual Journey at 9:45 a.m., Sunday, January 14 at the Newtown Quaker Meetinghouse, 219 Court Street. Following the presentation, there will be worship in the manner of Friends at 11:00 a.m., with people speaking out of the silence as they are moved to do so (http://newsite.newtownfriendsmeeting.org).

Alisa Myles is a familiar name to many people in Newtown. She has been active with Honey Hollow Nature Center, Center for Literacy, and Arbor Day. And, as Co-Chairperson of the Newtown Board of Recreation, she helped create the Brian Gregg Memorial Park, the Peaceable Kingdom Playground, and introduce such annual community events as Music in the Park and Movies in the Park.

Originally from Philadelphia, Alisa says her spiritual journey took her from inner-city Philadelphia to the United Kingdom and back again. She will share her experiences working at Norris Square Neighborhood Project, NSNP in Philadelphia, where she worked with inner-city youth on environmental education and community revitalization projects. Myles will discuss how she was able to bring this spirit of community involvement and environmental education to her Newtown community through her numerous activities.

Alisa will give a personal testimony of what led her to become a convinced Quaker, as well as what led her into the field of education. She will share precepts she has come to know by way of raising a family, nourishing friendships and continuing to be an involved local citizen.

Alisa met her British husband, Stuart, who is now the Director of Information Management at the Associated Press, while they were both at University in Scotland. They have two daughters, Sophie and Violet, both graduates of George School and now both attending universities in Canada. Alisa presently works as a Reading Specialist in the Pennsbury School District, where she cultivates good readers at Eleanor Roosevelt Elementary School.