Adult Class to Hear From Escapees From Soviet Occupied Hungary 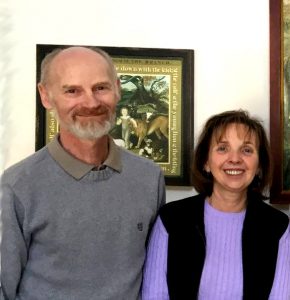 Eva Jakabovics and Peter Vari will speak about their journey from Hungary to and in America to the adult class at the Newtown Quaker Meetinghouse, 219 Court Street, on Sunday, March 19 at 9:45 a.m. Meeting for Worship in the manner of Friends will begin at 11 a.m. The public is invited to attend both events.

Peter graduated from the Polytechnic University of Budapest (BME) with degrees in Mechanical Engineering and Automation Controls. They were married in 1977. Their first son, Gabor was born a year later. The three of them escaped in 1981 and after a 7 week journey they arrived to the US as legal immigrants.

Peter’s uncle, who himself escaped from Hungary after the failed uprising in 1956 and lived in New Jersey, helped to get them established in their new home.

Newtown Friends Meeting, co-founded by the Quaker artist and minister, Edward Hicks, in 1815, holds services every First Day (Sunday). During the school year, First Day classes for children and adults are at 9:45 a.m. and Meeting for Worship is at 11:00 a.m. Professional childcare is provided. All meetings are open to the public and visitors are warmly welcomed.