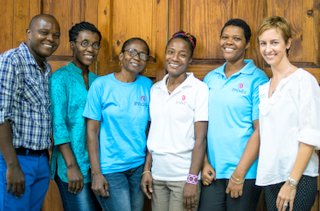 Sara Wolf, educator, and international development coordinator, joined by five Haitian colleagues will speak on “Innovation in Haiti’s Schools,” at the Newtown Friends Meeting on Sunday, October 28 at 9:45 a.m. The public is invited.

Sara Wolf grew up in Newtown and is a 1999 graduate of George School and a member of Newtown Quaker Meeting. Sara has a political science degree from Haverford College and a Masters in urban education from Harvard University

While developing “child-friendly spaces” in Haiti after the devastating earthquake of 2010, Sara worked with AMURT, an Indian-based relief organization, to provide innovative education to children in the make-shift camps. Rejecting traditional methods, she used art, music, dance, sports, and yoga to enliven children’s school days. Parents would report how much fun their children were having while also learning so much.

The Haitian Ministry of Education took notice of these innovative approaches and agreed to partner with AMURT and Universite Quisqueiya in Port-au-Prince to create an institute for innovation in education. Sara is now the program director of this institute, known as InnovEd, which is now affiliated with Quisqueiya, Haiti’s flagship university.

For Sunday’s presentation, Sara will be joined by five teachers and trainers who have worked with Sara since 2010. This is the first time they are traveling to the U.S. after several failed attempts to obtain visas. They are Marie Ange Frederick, Mileine Louis, Kettlie Lafaille, Daline Elysee and Steeve Pierre.

The goal of their week-long trip is to observe, learn from and interact with students in New York City and Newtown. Last spring they hosted a group of students and teachers from George School for an afternoon of sharing at the university in Port-au-Prince.

During Sunday’s presentation, the musical maestro Steeve will sing a few songs that he wrote to accompany their training programs and highlight their dynamic approach. The group will also show video clips of their pedagogical strategies.

Working with over 450 schools, InnovEd has conducted 200-hour in-service programs for about 4000 educators, including school directors, teachers, and coaches, in both Port-au-Prince and the countryside. These programs stress active learning while celebrating local culture.

Recognized for its success, InnovEd has received over $4 million in grants from the Kellogg Foundation, USAID and the German government.

Wolf, 37, first went to Haiti in 2009 with a team of New York City teachers to conduct professional development programs for educators. For five years before that, she taught global history at the International High School in New York City, a public school serving immigrant children in Queens. After the earthquake in Haiti, she resigned her teaching job to join the recovery effort in Port-au-Prince.