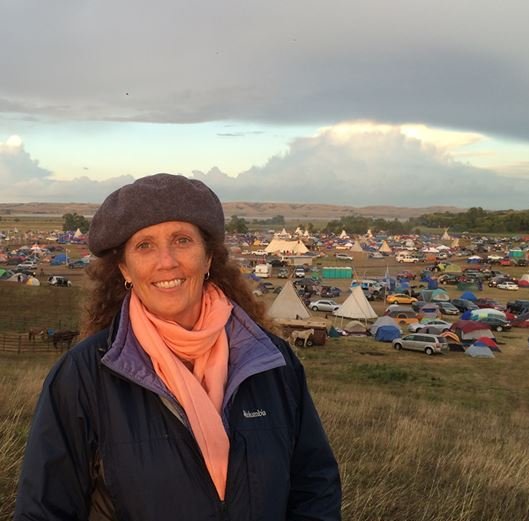 Patricia Walsh-Collins is a Quaker, educator, entrepreneur, and environmental activist. This past September, she and her daughter Lily Collins drove for two and a half days to stand with the Standing Rock Nation of North Dakota in protesting the “Dakota Access Pipeline” through Indian Territory. Patricia will discuss her experience for the Newtown Quaker Meeting adult class Sunday, November 13 at 9:45 a.m., 219 Court Street, Newtown. The public is invited to attend.

The “Dakota Access” Pipeline (DAPL) is a thousand-mile fracked-oil pipeline currently under construction from the Bakken shale fields of North Dakota to Peoria, Illinois. DAPL crosses Lakota Treaty Territory at the Standing Rock Sioux Reservation where it is intended to lay pipes underneath the longest river in North America, the Missouri River.

To date, over three hundred First Nations have reconciled their differences and united to defend the waters of this land. They have taken on the role of ‘Water Protectors’ of the Earth (http://sacredstonecamp.org). Because of this unification, the camp has reclaimed an ancient name of the past, when the Lakota, Dakota, and Nakota Nations lived as one, the great Souix Nation, ‘Oceti Sakowin’.

Walsh-Collins said, “These people are not protesters but protectors. As Water Protectors, they have taken a united stand, declaring they will not retreat until the pipeline is halted permanently. These Water Protectors are unarmed, and peacefully resisting and protecting through prayer, ceremony and the collective energies of the indigenous people.

By the weekend of our stay, the camp had swelled to at least five thousand people. Days are filled with ceremony, prayer, offerings, service to others, and non-violent direct action against the construction. All is done in peace. ‘Mni Wiconi’, ‘Water is Life’ says it all.”

Patricia Walsh-Collins is a member of Solebury Friends Meeting, taught at Buckingham Friends School for 17 years and is the founder of ‘Art of Spirit’ which imports for re-sale traditional arts from Native Cultures. She also founded and directs Earth School, where she shares her experiences and studies with children and their families.