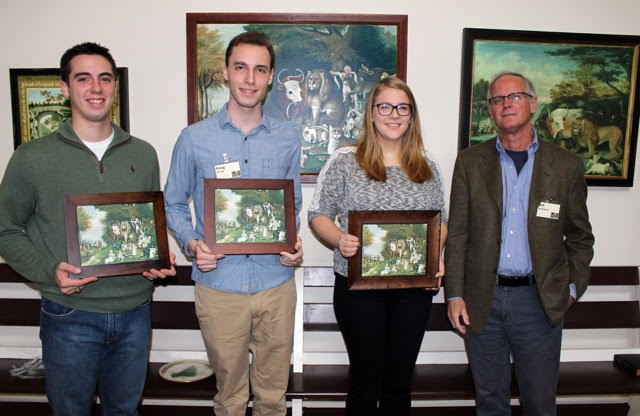 Five young adults of Newtown Quaker Meeting were recognized at “Quaker Homecoming” after meeting for worship, December 27, 2015, at the historic Friends Meetinghouse, 219 Court Street.
Each young person in the Quaker Meeting, at age twenty-one, receives a framed replica of one of Edward Hicks paintings of The Peaceable Kingdom in recognition of attaining his or her majority as an adult member of the community.  The reproductions of The Peaceable Kingdom are provided by courtesy of the Abby Aldrich Rockefeller Folk Art Museum in Williamsburg, Virginia.

Similar copies of this painting have been presented by members of the local Newtown Quaker Meeting to His Holiness the 14th Dalai Lama of Tibet, to Mayor Michael Nutter of Philadelphia, and to Quaker leaders throughout the country.

Bryan Silverman, Yardley, a senior at West Point, is majoring in International Studies and receiving his commission as Second Lieutenant in the Infantry.  Silverman said he plans to hang his copy of The Peaceable Kingdom in his future office and share its Quaker philosophies with his fellow soldiers.

Greg Sowiak, Newtown, is a senior at Rensselaer Polytechnic Institute, majoring in Chemical Engineering and pursuing worship through song in the school’s concert choir and acapella groups.

Edward Hicks was co-founder of Newtown Friends Meeting in 1815. During his lifetime, he was known primarily as a Quaker minister, and painted coaches, signs and “ornamentals” for a modest living.

Hicks traveled throughout the area and sometimes gave one of his more-than sixty versions of The Peaceable Kingdom to Friends who provided hospitality for him during his travels. The paintings are based on the Old Testament prophecy that in God’s peaceable kingdom, the lion shall lie down with the lamb and a little child will lead all creatures. In the background of the painting is the Quaker founder of Pennsylvania, William Penn, arranging a treaty with Native Americans.

Hicks paintings now hang in leading museums throughout the country and are highly valued. Many replicas of his paintings are exhibited in the Newtown Meetinghouse Gathering Room including Bucks County’s Twining Farm, The Signing of the Declaration of Independence, General George Washington on horseback, and several versions of his Peaceable Kingdom.Edward Hicks’ home, a Newtown historic site, is on Center Street, and his modest grave is in the burying ground at Newtown Friends Meeting, another Newtown historic site.

Newtown Friends Meeting also presents Bibles to children in the Meeting at age twelve and copies of the Quaker “Faith and Practice” to young people at age sixteen.